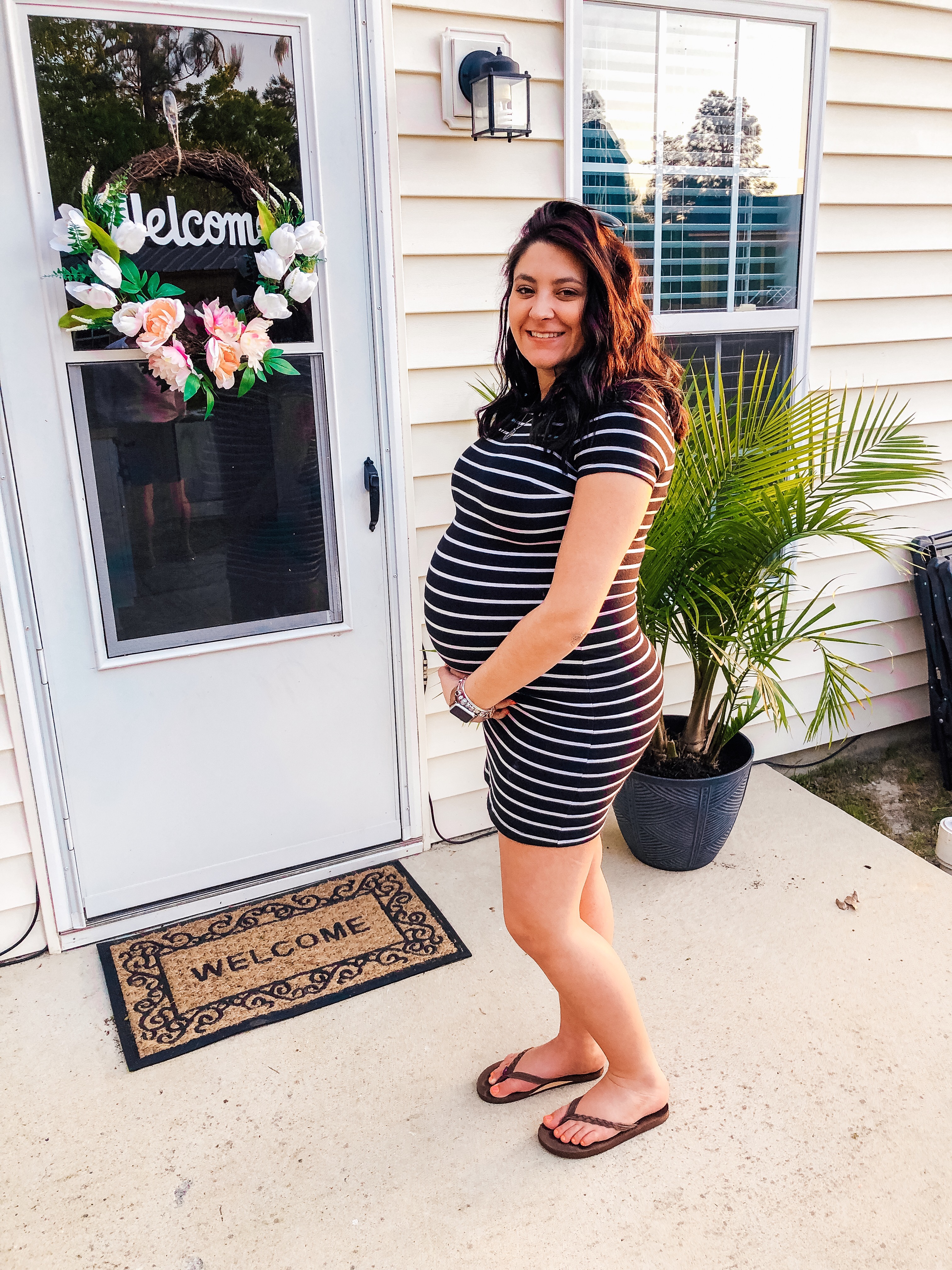 Hey y’all! I’m back with a longgg baby post today! I’m going to cover my bumpdate, a third trimester checklist and what I got from our baby registry!

As I’m writing this I’m currently 39 weeks and 4 days. Thursday I’ll be 40 weeks but I’m hoping to have this post up before then (which as we all know never happened.) At this point in my pregnancy I’m also hoping to have Baby E by then if I’m honest. But of course, I know she’ll come when she decides she’s ready. But if this little missy isn’t “ready” by the 16th of May she will be given her eviction notice! Here’s to hoping she wants to come before then!!

But, now that it’s almost over, it’s fun to look back on pregnancy longingly, but in reality it was a really tough nine months for me physically from day one. To this day, I don’t believe a single soul who says that they love being pregnant. I felt so sick for 90% of the time that it’s hard to imagine feeling good! In the end, every nauseous day, every night without sleep, and every ache and pain will be beyond worth it, and weirdly the last two weeks have been the ones where I’ve felt the best which has been so nice.

Being pregnant. The fact that I actually was pregnant was obviously the biggest surprise/perk in the first trimester. I had to keep looking at the test every 20 minutes because I couldn’t believe, it didn’t feel real.

First ultrasound.  When Brandon and I heard our baby’s heartbeat for the first time at nine weeks, I cried at the doctor’s office. The heartbeat made everything seem so real.

Exhaustion. Like most expectant mothers, I was an absolute zombie in my first trimester. I came home on my lunch breaks just to take naps and was in bed either before or as close to eight as possible. As someone who likes to be constantly on the go, it was so frustrating. Eventually I gave in and let myself rest when I needed to. It taught me a lot about slowing down, something that I needed to know for the rest of the pregnancy.

Nausea. The nausea I experienced in my first trimester was by far the pittiest pit of them all. In fact, it lasted until my 20th week and then came back in my third trimester (more on that later). It would hit me at some point each day… usually all day… and felt like a literal punch to the gut. At one point I was being sent home from work almost every other day. I couldn’t keep anything down it seemed.

More energy. Between 19 and 20 weeks I finally started feeling human again. I could work at my desk for hours in a row without needing to nap or get sick. It felt amazing to be back to normal again… Or a new normal at least.

Starting to show. During the first trimester I just looked a little heavy around the middle, but a real bump started growing around 22-24 weeks. It was small at first but it was there! I struggled with some body image issues until the third trimester, but at least I was looking more pregnant than ‘chubby’ and Brandon was a big help in keeping me positive.

Feeling kicks. Feeling the baby’s first little flutter kicks made my heart jump. Brandon couldn’t feel them from the outside at first, so it was a special thing that just the two of us shared. She’d pop up and say hello on a daily basis. I remember the day he could finally feel her kick. He freaked out at first but now he loves feeling her move around.

Excitement of baby’s arrival. “The baby” was kind of an in-the-future concept until the third trimester. Then it became real. I started prepping for labor, decorating the nursery and getting everything ready for her arrival. We’re about to have another real live human enter our lives and that is both exciting and terrifying in a way that I can’t really put into words.

Throwing up. I always assumed that morning sickness was just a first trimester thing, but for me that was certainly not the case. It was different at the end but for most of the third trimester (starting around 35 weeks) I’ve been throwing up or feeling sick almost daily.

Now that baby girl has dropped and is no longer sitting on my stomach, it has eased up thank goodness. This last week or so I’d go to the doctor and had lost weight which made me feel like the worst mother in the world, but there was really nothing I could do to stop it so Ive been trying to take it easy on myself.

Generally uncomfortable. As I’ve gotten bigger and bigger,  everything just started feeling uncomfortable. The humidity is starting to pick up and linger making it hard to breathe because I feel so hot and flushed, and when I walk she presses down in a way that hurts in my you-know-what. Luckily I’m not getting nauseous as often and have way more energy so I’m totally down with the uncomfortableness.  A lot of my friends said this is the worst part, but for me the end hasn’t been nearly as tough as the first!

I don’t want to sound like I’m complaining. Honestly and truly I’m not. I’m blessed to have been able to grow and support my baby. But that being said being pregnant wasn’t a walk in the park for me. I loved parts more than others but I the love I developed for my baby before she was even born was what I really enjoyed the most.

Feeling her move around while still inside me would sometimes be so overwhelming. I’m a mom. I made a person. A little baby girl who I could not wait not have and meet and hold. Of course I knew it wouldn’t be easy. But it would be 100% worth it.

Manage Cookie Consent
To provide the best experiences, we use technologies like cookies to store and/or access device information. Consenting to these technologies will allow us to process data such as browsing behavior or unique IDs on this site. Not consenting or withdrawing consent, may adversely affect certain features and functions.
Manage options Manage services Manage vendors Read more about these purposes
View preferences
{title} {title} {title}